Wind in the manuka scrub 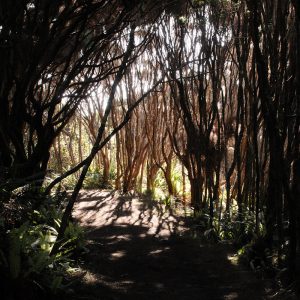 Our entire New Zealand holiday was amazing, but the best experience of all was our trip to Stewart Island/Rakiura. The 674 square mile island lies just south of the South Island mainland and is unpopulated except for the small town of Oban on the north coast.

It’s possible to fly or sail to Oban and take day trips from there to various points on the island, but we wanted to do something slightly more adventurous without embarking on a multi-day hike. Stewart Island Flights’ Coast to Coast fit the bill perfectly. You are flown from Invercargill on the mainland to Mason Bay on the island’s remote west coast, where you spend the night in a Department of Conservation (DoC) hut. The following morning you walk 9 miles to a landing point on the Freshwater River, where you are picked up by water taxi and returned to Oban. You get a night in Oban and then return to Invercargill the next morning.

Just after lunch on a Monday afternoon we left our camper van in the carpark at Invercargill’s small airport and presented ourselves at the check-in desk. Checking in was a rather more relaxed affair than your average airline flight – the main formality consisted of filling out a DoC “intentions card” detailing our planned route and when we expected to return to civilisation. Not long after that we were walking across the tarmac to the 4-seater Cessna 185, and within a few minutes we were airborne, flying south past the distinctive headland at Bluff and out into the Foveaux Strait which separates Stewart Island from the mainland. Gradually the forested hills of the island emerged from the mist in front of us, and soon we were crossing the coast and flying low over a saddle between two of the northern peaks. The last few minutes of the flight and landing at Mason Bay are best described not in words but in the following video!

Landing at Mason Bay from pterodaktyl on Vimeo.

A few minutes later we watched the plane lift off the beach and vanish into the distance, leaving us and the one other hiker walking the same route standing alone on the huge, empty sweep of sand. We gathered up our packs and started up the trail through the dunes leading to the DoC hut about half a mile inland. Introduced Skylarks and native New Zealand Pipits called from the clumps of flax along the path.

The DoC hut was basic but welcoming – divided up between a large kitchen and dining area and three sleeping rooms each containing a number of bunk beds. We were there before the start of the main season and the only other people at the hut were the other hiker doing the coast to coast walk and a wildlife photographer who flew in later in the day with some very impressive camera gear. This meant we got a room to ourselves – obviously at peak times you’d most likely be sharing with other visitors.

As it was still only mid-afternoon by the time we’d arrived at the hut and unpacked, we decided to take a walk along the trail that we would be following the next day, to familiarise ourselves with the terrain and take a few photos. From the DoC hut the trail wound gently uphill through manuka scrub, before emerging on a windswept saddle at the old Island Hill Run homestead, now a bunkhouse for DoC maintenance crews. On the other side of the saddle the terrain changed to flax and tussock grass scrub as the trail begun its descent toward the distant Freshwater River.

Probably because of the constant wind we heard very few bird calls in this area. We saw an occasional Tui or Tomtit, but these mostly remained silent. As we made our way back towards the DoC hut through the manuka scrub, I noticed the gusts of wind were making the dry branches creak and groan as they rubbed against each other. I found a sheltered spot out of the wind to place the PCM-D50 and got this recording: