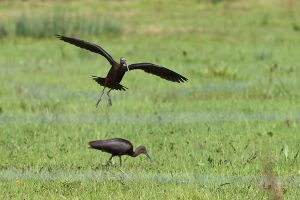 These striking birds normally breed in southern Europe and overwinter in Africa, so when you hear that a flock of 20 has turned up just a few miles away it’s not something you want to miss.

We caught up with the birds feeding on an area of wet pasture just behind the local cricket pitch. Initially we watched them from a discreet distance, but after seeing how indifferent the birds were to other people wandering around the area we moved a little closer. The flock then began moving directly towards us whilst feeding, until eventually they were less than 20 meters away. Getting that close to any wading bird is an unusual privilege, never mind something as exotic as these! A barbed wire fence and some Dock plants severely cut down the photo opportunities, but I managed to get a photo of one of the birds coming in to land, and Lil got a good shot of one on the ground.

I took along some sound recording gear, but the ibises were incredibly quiet, even when an occasional scuffle broke out amongst the flock. I didn’t think I’d recorded any calls at all, but after getting home and listening carefully I discovered what I’m pretty sure is a single faint call:

Certainly not the best recording I’ve ever made, but it was brilliant just to spend a couple of hours watching the birds up close.

While the recorder was running I also picked up a Cetti’s Warbler. First recorded as breeding in the UK in 1973, in the last 10 years or so there’s been a population explosion of these birds in south-west England and you can now find them almost anywhere where there’s a decent amount of marshland and scrubby bushes. From a sound recording point of view they’re very challenging, as their usual behaviour is to skulk in a bush for several minutes, call once, and then fly off to another bush, meaning the recordist is always one step behind!