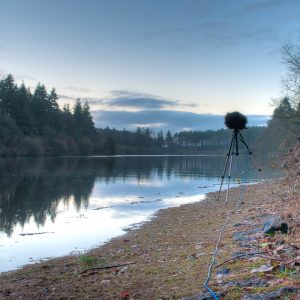 For those listeners who are still deep in the ice and snow of a northern winter, here’s a taste of the coming Spring. This recording was made yesterday on the banks of Tottiford Reservoir in Dartmoor National Park. The maritime climate here means that although cold weather is still possible at this time of year, the average daytime temperate is well above freezing (when I made this recording it was 7C), the first flowers are already appearing and the buds are breaking on the trees.

When I left home at 05:30 a full moon was high in the sky and the birds in the coastal town where we live were already in full voice. During the drive to the reservoir a thick band of cloud covered the sky, and when I got there I was greeted by total silence except for the dripping of trees still wet from the previous night’s downpour. It was another half-hour or so before the clouds broke, allowing the dawn light to filter through and the birds to start singing.

The microphones (2 x AT4022 in a partially baffled boundary array) were located right on the shoreline at a narrow point in the reservoir, facing across the water towards a hillside covered with conifers and birch trees. Listen out for the twittering calls of a flock of Crossbills as they fly across the lake, and the occasional distant wing-claps of displaying Woodpigeons.