Ever since I can remember I’ve been fascinated by recording the sounds of the natural world. We had no TV in our household until I was 13, so I grew up listening to the BBC’s weekly “Natural History Programme”. Without the visual impact of a TV documentary the programme depended heavily on recordings of the environments and wildlife being discussed. At that time I had a Sony mono cassette recorder and a £10 microphone from the local Radio Shack (or Tandy as it was then), so my own efforts at recording were pretty dire.

A couple of years ago I needed some equipment for a project that involved recording railway engines, and ended up with a Tascam HD-P2 CompactFlash recorder and an Audio-Technica AT825 X/Y stereo microphone. This setup worked fine for the railway project – with the mic mounted in a Rycote windshield/windjammer combo it can be boomed out the window of a train moving at 25mph with no appreciable wind noise. Any attempt at recording quieter natural sounds just ended being drowned out by clearly audible hissing, and I resigned myself to the fact that the equipment I would need to make any decent recordings was way beyond my budget.

A few months ago I discovered the excellent “naturerecordists” Yahoo group. Reading the postings there and doing some of my own research I began to realise that what I had was a perfectly adequate sound recorder that was being crippled by a microphone with high levels of self-noise. Further reading led me to a couple of (relatively) cheap mono microphones with very low self-noise, which can be used in pairs to create stereo recordings. One of these is the Audio-Technica AT3032 omnidirectional mic, as used by Curt Olsen. When I tried to purchase a pair of these I discovered that they are now discontinued and the replacement, the AT4022, is far more expensive.

The other affordable microphone people were talking about was the R?DE NT1-A. After listening to some of John Hartog‘s excellent recordings with these microphones, I went ahead and purchased a matched pair from DV247. Unlike the omnidirectional AT3032s which require some kind of barrier between the pair to achieve a stereo effect, the NT1-A is a cardioid microphone, so named because it is most sensitive to sounds coming from a roughly heart-shaped are in front of the capsule. This means that by placing the two microphones at the correct angle and spacing relative to each other, a stereo effect can be obtained with no barrier between them. There are various configurations, developed through years of testing – in the end I decided to use an ORTF array, with the microphone capsules spaced 17cm apart and with a 110 degree angle between them.

The next problem was shielding the microphones from wind and vibration, both frequent problems when trying to record very quiet sounds outside. R?DE supply a pretty decent shockmount with the microphone, but it’s designed with studio use in mind and it’s very hard to fit any kind of windshielding around. My first design, using the R?DE shockmounts on a stereo bar with a large, fleece-covered flowerpot over the top worked surprisingly well, but didn’t score very highly on portability and looked totally bizarre. Clearly I needed something more sophisticated, so I paid a couple of visits to B&Q, called up the bits and pieces of knowledge left over from A-Level design technology lessons, and the result is what you see below: 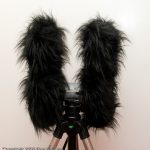 This is a great improvement on the flowerpot design – people might still stop and stare, but at least it looks professional (and most nature recording takes place as far away from other people as possible anyway!) Removing the fur (long pile toymaking fur on a mesh backing) shows the microphone suspension: 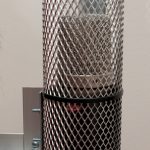 This is made from a length of 68mm diameter plastic drainpipe, roughly as long as the body of the microphone. Wrapped around this is a 25x25cm sheet of metal mesh, held in place with cable ties. The mesh has gaffer tape wrapped around the edges to cover up the razor-sharp points left behind when the metal is cut.

The image above shows how the microphone is mounted within the pipe. The red bands are the ones Royal Mail use to hold together bundles of letters – our local postman scatters them around the area like confetti, so there’s always a good supply of spares! The band at the bottom of the microphone restricts side to side motion, while the one and the top (not visible in this picture) restricts forward and backward motion. This allows quite a lot of play in the microphones, and I know some of the other mounts I’ve seen use a more rigid system with additional bands, so I may have to make some modifications in the future to improve the shock mounting. 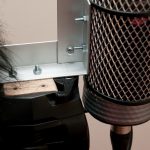 The final picture shows how the whole setup attaches to a Velbon tripod head. The central structure of the array is made three sections of lightweight aluminium angle bar. The sections are held together with butterfly nuts for easy removal. The central section is bolted to a piece of 6mm MDF sheet, cut to fit into the quick-release plate holder on the tripod. The only flaw with this design is that the left-hand microphone pod prevents full movement of the quick-release lever, but a few turns of the butterfly nut on that side creates enough space to move the lever and remove the array from the tripod. Ironically, the weather since I put the array together has been exceptionally calm for winter on the English coast, so I haven’t yet had a chance to try it out in a stiff breeze. I did make a recording of the frogs in our garden pond a few nights ago, which nicely demonstrates the stereo field and can be heard below: